Part One: Finding My Voice 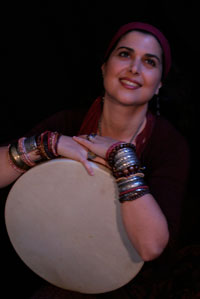 Christiane Karam is an Associate Professor of Voice at the Berklee School of Music in Boston, MA, specializing in Voice. Her passion is helping students to access their truth through finding their unique voice, through song, speech and writing. She is a founder, leader, and vocalist of the Boston-based world/Middle Eastern music band ZilZALA. She is a founder of the Shades of Orient concert series at Berklee, 2001–2003, and cofounder of the Berklee Music and Peace Initiative.

Christiane is also a founder and leader of the Annual Berklee Middle Eastern Festival. She has collaborated and performed with the Assad Brothers, Atlas Soul, Ran Blake, Jamey Haddad, Bobby McFerrin, the Millenium Gospel Choir, the New York Arabic Orchestra, the NY Gypsy All-Stars, Yanka Rupkina, Bassam Saba, Hüsnü Senlendirici, and .WAV, and also with the Boston Pops and the Tanglewood Festival Chorus. Solo recordings include award-winning EP I’m Alive with producer Angel Angelov and self-produced Songs of the People with ZilZALA. The interview presented here comes from a course “Poetry of the Sufi Mystics” presented by USHS.

For More information on Christiane and her work, visit http://www.christianekaram.com/ Erica (Rifqa) Bolliger is an integrative healer, health educator, Naqib in the Shadhilliya Sufi Order, musician, writer and thinker.  She holds a BA in Holistic Health from Oberlin College and is a recent graduate of the University of Spiritual Healing and Sufism’s Master of Divinity (Ministry) program, where her practicum focused on helping Westerners become aware of the progressive side of Islam.Formerly an anatomy, physiology and pathology instructor at massage schools on both sides of the country, she excels at communicating the mystery and complexity of being human, in ways the lay public can easily grasp.  Her twenty-eight year private practice combines counseling, Somatic Experiencing® trauma recovery, bodywork, holistic and functional nutrition, natural mood support, and spiritual healing, with an emphasis on bridging spirit-body-heart-mind.

Erica lives in Portland, OR with her husband and two cats, in a co-housing community she helped found.  She can be reached the old fashioned way, at her clinic, Pacific BodyMind Therapies. Kabir Helminski is a translator of the works of Rumi and others, a Shaikh of the Mevlevi Order (which traces back to Jalaluddin Rumi), co-director of The Threshold Society (Sufism.org) and director/founder of the Baraka Institute (barakainstitute.org).

In 2009 and subsequent years Kabir was named as one of the “500 Most Influential Muslims in the World” by Georgetown University and the Royal Strategic Studies Center (Jordan). He has toured North America as Shaikh with the Whirling Dervishes of Turkey bringing Sufi culture to more than 100,000 people.

The focus of his work has been developing an “applied spirituality,” based in classical Islamic Sufism, that can meet the needs of our time. The Threshold Society offers spiritual training to small groups throughout North America, the UK, the Netherlands, Poland, Pakistan, and Indonesia.

In March 2017 Holistic Islam: Sufism, Consciousness, and The Needs of Our Time will be published by White Cloud Press.

His books on spirituality, Living Presence and The Knowing Heart, have been published in at least eight languages. In 2017, Living Presence is being published in a commemorative 25th anniversary edition in the Spiritual Cornerstones series by Penguin Books. Among his recent publications are: Love’s Ripening, Rumi on the Heart’s Journey (Shambhala 2010); and The Rumi Daybook (Shambhala 2012). In total, his books have sold about 250,000 copies.

He regularly writes and blogs for The Huffington Post, Tikkun, Patheos.com, and The Times of India. The portion presented here comes from a course “Poetry of the Sufi Mystics” presented by USHS.